On Tuesday, the POPeration! team kicked off Pride Month with a show all about something very precious in the LGBT community (although admittedly more important to the "G" than perhaps the other letters in our alphabet soup) ... the diva.

On the show, I mentioned that a good icebreaker when in the company of a group of gay men you don't know is a quick round of "Who's Your Diva?" - I've done this on several occasions, with old friends and new, and it nearly always works. The reason why a particular diva has stolen the heart of the gay man in front of you nearly always makes for a great story, and the choice itself probably tells you a lot about the guy than you'll ever learn from asking him where he grew up or what he does for a living. I don't know if there's a Buzzfeed quiz about this or not, but there probably should be (in fact, there are probably several).

I should say, right off the bat, that some men refuse to play. These are typically men who have never seen a movie that was made before they were born, and when you ask them what kind of music they like, will say something non-committal like, "whatever's on the radio." We can't change these men; we can only pity them. But for the rest of us, it's a pretty fun game.

When I asked my friend Ric this question, he first scoffed at the notion of choosing only one - but when pressed, he noted that "Eartha Kitt as Catwoman nearly made me straight."

Furthermore, he said that Eartha "personified sensuality, embodied elegance but was a strong woman with simple needs who gave no fucks and maintained her principles and integrity to the end." Indeed, in her heyday, she was often known as much for her fierce activism as her iconic voice and sex appeal. It perhaps should come as no surprise that in addition to being supremely witty and a connoisseur of high fashion, Ric is also someone who follows politics fairly religiously.

My friend Andrew reports that his diva of choice is Annie Lennox. "When she was young," he says, "she had a cool, almost icy persona with which I could relate, along with a soulful vocal style that I really wanted to emulate."


"Perhaps I thought in a subconscious way that being that icy could steel me in the face of being made fun of constantly, which I was," he continued. "But actively, if I thought anything, it was that first, Annie Lennox scared me when I was 10 years old, with her mannish hair and her expressive eyes and intense lyrics like in 'Julia' and 'Somebody Told Me' and 'Love Is a Stranger.' Second, that fear electrified me, and soon I realized that I envied how free she seemed to express herself however she wanted. And third, she and the other new wave and New Romantic performers I listened to ... were a refuge from the outside world. Alone, with no one watching, I could at least carry the fantasy openly that I was as made-up, emotive and talented as they, even if I looked delusional dancing around and singing like that while alone in my room. Most importantly, I just loved her voice. I still do."

I love stories like that. Mostly, I love that when talking about their favorite divas, gay men often start to open up about some of the most vulnerable moments in their life, as Andrew did. Also, I'm reminded of how important these women are to us -- as boys, but also as men. Somehow, these stories make my endless devotion to Liza Minnelli seem less ... trivial. But more about that later.

My friend Howard came of age during the age of disco, and his immediate choice was Donna Summer. "[Those] were the days of discovering (and creating) a gay community, exploring our sexuality, and the last pre-AIDS carefree days for gay men," he said.

As a 46-year old gay man, I never got to know that world. The virus that would eventually be called AIDS was discovered when I was 11, and by the time I was in my mid-teens, AIDS was a household word. When I came out to myself and everyone else in my twenties, I had already known men who had died from the disease, and the first explorations of my own sexuality were always tinged with a fear of getting sick. If I had memories of a simpler time and a diva to embody them, I'd likely cling to that as well.

My Uncle Lee - not related by blood but by choice, agreed that Summer "did almost literally drive us for the better part of a decade ... Disco, and especially 'The Bump' let me have virtual sex with a hundred people without the exchange of ANYTHING." At the same time, Lee's true divas of choice are singers who can touch his soul when he's on his own, in a more contemplative mood ... someone like Carmen McRae.

Like her idol, Billie Holliday, McRae was known as a "song stylist," known for her unique and poignant interpretation of every lyric she sang. Play this game with the right people, and you'll find that there's a whole world of divas beyond Madonna and Lady Gaga.

Not that there's anything wrong with Madonna. She's the go-to diva for many a gay man born on the border between Generation X and the Millennials, and that's also true for my friend Matt.

And you have to admit, Madonna's "Vogue" is a little slice of gay heaven right here on earth. Voguing was a form of dance first popularized by queer men of color in the "ball scenes" of Washington DC and Harlem. That many of her fans had no idea what Madge was singing about in 1990 when this song debuted alongside the release of the Dick Tracy film doesn't matter; her gay fans surely did -- and we loved her for it.

Michael John is another fan of Madonna. She's "someone who has reinvented herself time and time again," he notes. And I think that's important to us gay guys. Nearly all of us have felt like an ugly duckling at some point in our lives, and watching a diva try on one persona after another is perhaps proof that one day, we'll finally be a swan. Furthermore, "she unapologetically pushed the boundaries" in her music and her videos (burning crosses and a black Jesus in "Like a Prayer" come to mind). For a community that feels like our very existence often pushes the boundaries, this is -- for us -- something we admire, not something we shy away from.

Another Matt has an unusual choice for his primary diva -- unusual, that is, unless you know him well. This other Matt is a quiet sort. He'll sit around a table, still nursing his first glass of wine when everyone else is reaching for a new bottle, and he'll barely say a word ... until there's a moment of silence. Suddenly, the most devastatingly witty thing anyone's said all night will effortlessly fall from his lips. And then he'll shrug his shoulders. When I asked him who his favorite diva was, he was predictably succinct in his response. He paused, cocked his head, said "Angela Lansbury," and changed the subject.

As for my own diva -- I said it on the show, and a few paragraphs north of this one, and will say it to anyone who cares to listen: my gay heart forever belongs to Miss Liza Minnelli.


When I was fifteen or sixteen years old, I discovered Bob Fosse's film version of Cabaret. My father was a Navy officer, and we were stationed overseas at the time, and we had a copy of the movie on VHS. I watched it over, and over, and over again. My father admitted that my devotion to this movie worried him. I suspected that he suspected that I was gay, and I told him he had nothing to worry about. I thought I was being honest.

Part of my fascination with Cabaret had to do with Michael York's character, Brian -- and his crush on Maximillian, played by the very handsome Helmut Greig. When he confessed to a sexual relationship with Max toward the end of the film, it was a devastating moment for me, and remained so -- even after repeated viewings. But that's not what drew me to watch this particular movie again, and again, and again. That impetus was all about Sally Bowles, as portrayed by Liza.

In the film, she's heartbreaking, funny, pathetic, brassy, insecure, desperate to connect while being completely ignorant of how to do so, and driven to be nothing less than her authentic self while not having a clue who that is. In other words, she was a lot like the closeted teenager that I was when I first saw Cabaret. I maintain that it's one of the finest performances in a musical in the history of film, and it deservedly won Minnelli an Oscar in 1972 -- when I was a year old. That it spoke to me fourteen years later, and still speaks to me today, as an out gay man in my forties, is a testament to that performance.

And it's not just about that one film. In the 90's, when she was at the peak of her powers, I saw Liza perform live on three occasions, and they remain some of the most magical show biz memories of my life.

Some people (see what I did there?) see Liza as simply a parody of a gaudier time, and I credit myself with not a little bit of a maturity that these days, I don't try to convince anyone to love Liza as much as I do. Because no one really can, at least not in exactly the same way. Liza Minnelli entered my life, encased in a plastic VHS cassette, when I needed someone to really understand me, at a moment when I didn't really understand myself. And it's entirely possible that that's who Annie Lennox was to Andrew. It's likely that this is what Madonna means to Michael John and Matt no. 1, and what Angela Lansbury means to Matt no. 2. And what Cher means to Sidney, what Sara Bareilles means to Kyle, what Stevie Nicks means to Rob, what Mina means to Larry, what Diana Ross means to Lou, what Lady Gaga means to JJ, what Joan Baez means to Steve, what Barbra Streisand means to Garrick and Brett, and what Bette Midler means to Jon, and what Adele means to John.

If you've got your own answer to "Who's Your Diva," please leave it below or on our Facebook page. Because we truly can't get enough of these stories. Oh, and ... Happy Pride.
Posted by Red Seven at 7:00 AM

Back to the home page 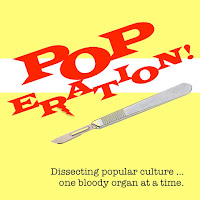